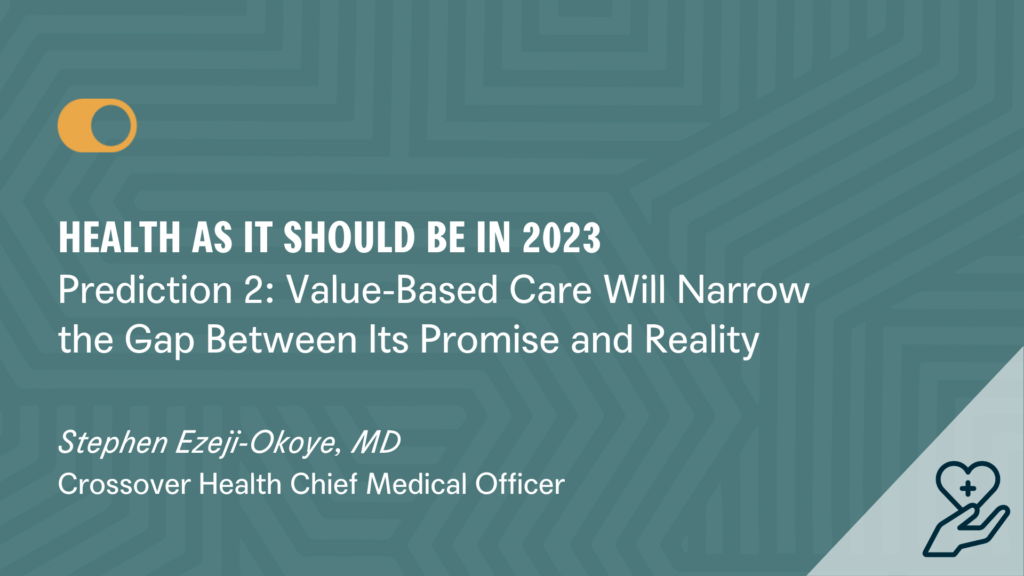 2023 Prediction 2: By Delivering Better Health – Rather Than Less Sickness – Value-Based Care Will Narrow the Gap Between Its Promise and Reality

These days, it seems like value-based care is having something of an identity crisis. While analysts project the proportion of the insured population in “at risk” contracts will continue to grow and pick up pace, value-based payments still make up just 6.74 percent of total medical revenue at primary care practices. And despite the term “value-based care” being widely adopted as a kind of industry-wide virtue-signal (including by companies that have barely dipped a toe in the risk pool), actual value-based programs are facing new levels of scrutiny for their efficacy in lowering costs, equity in their approach to underserved communities, and even ethics in how some programs are being exploited for financial gain.

Perhaps not coincidentally, recent research shows that public trust in the US health system is on the decline – a trend exacerbated by the pandemic but also long in the works. What will it take to regain trust and connect the dots between value-based care’s promise and reality? We need to rethink the goals we are aiming for and shift mindsets, models, and mechanisms upstream: from managing sickness to keeping people well.

Put relationships at the center of care

As the authors of NASEM’s comprehensive study of advanced primary care stress, “payment models create the fiscal space in which care delivery can either flourish or be constrained.” The dominant fee-for-service model, at its worst, leads to patients being treated as a collection of parts to be serviced and repaired. While value-based care encourages a more holistic view, many payment models still incentivize a check-box approach to care, where patients become a collection of diseases and quality measures to be managed rather than individuals with unique values and health goals.

As Jane Sarasohn-Kahn, health economist and author of Health Populi points out, “Value-based health care is best delivered through interdisciplinary teams via well-designed hybrid delivery platforms, embedding patients’ values in a social contract of mutual respect.” At Crossover, our integrated team-based approach combined with a fixed-fee model gives us the flexibility and “fiscal space” to focus instead on what’s right for the member.

For example, as I have experienced first-hand as a practicing physician, a patient seeking medication to address chronic pain may actually trace that pain to a sedentary lifestyle, which may in turn trace to untreated depression. With both the time and team-based medical group structure to understand and unwind this patient’s story in an interdisciplinary context we can get to the source of the member’s issue. For instance, because we were freed from any conflicting incentive to keep a member on pain treatment, or even in long-term therapy, we instead could focus on helping him get back to health. All of which will not only save him years of suffering and medical visits, but will also avoid significant downstream costs for him and his employer. What began as a request for a prescription refill led to a six month course of care that resulted in him being taken off the medication and running a 5K, a bucket list item that once seemed unachievable when facing chronic pain. As a care team we were incentivized to focus on health outcomes and wellness.

Rethink how and what we measure

In the world of medicine, and just about everywhere else, what we measure and reward dictates what we get. Fee-for-service, by definition, measures and pays for care delivered, not for outcomes. Value-based care models typically measure and pay for the management of diseases – for example, the percent of patients with Type 2 diabetes under control. But managing disease is not the same as promoting health. What if, instead, the driving metric was the percent of your population without diabetes? By moving measurement upstream would we not then be more likely to prevent rather than manage diabetes, a disease consuming $1 out of $4 spent on healthcare in the US?

The same goes for how we measure and think about end-of-life and healthspan. Rather than just managing the effects of Alzheimer’s, what if we measured and paid for years in which it was delayed? This could lead to investing more and earlier in heading off mid-life diseases and psychosocial factors such as sleep disturbance, depression, and anxiety demonstrated to contribute to dementia. As one estimate projected, delaying the onset of Alzheimer’s by five years would reduce Medicare and Medicaid spending by $121 billion over the first five years.

Why is it that many of us routinely plan ahead for our financial security and retirement but don’t plan ahead for our health? At Crossover, we’ve reframed the preventive health visit as exactly that: a planning exercise to set future health goals and reverse-engineer the healthy habits that will help achieve them. We know, for example, from a recent predictive modeling study that switching at age 20 to an optimized diet of less red and processed meat and more fruits, vegetables, and whole grains would add between 10 and 13 years to one’s life. As Dan Heath explains in his book Upstream, there’s a reason why we perpetuate systems that manage sickness rather than prevent it: because it’s much harder to measure and pay for something that does not happen. If we’re going to be in the health business and not the sickness business, however, we need to rise to the challenge.

What’s next: going upstream and mainstream

The pandemic forced a reckoning with social determinants of health (SDOH) and health equity across the board. For value-based care in particular, this reckoning – fueled by recent social and racial justice movements – has sparked a long-overdue move upstream to screen for and address SDOH. As recent as 2019, only 24% of hospitals and 16% of physician practices reported screening consistently for all major social needs.

As health equity gets well-deserved focus, and screening for systematic SDOH becomes commonplace in value-based programs, I envision such screening and intervention becoming the new standard for comprehensive care for everyone. At Crossover, we screen all members for multiple SDOH factors. During the pandemic, it helped us learn that a member who was employed full-time had become unhoused. Through community partners we were then able to secure her housing before it could lead to an array of other health issues. Screening everyone not only reveals otherwise hidden issues or new linkages (such as findings we uncovered on the compounding health effects of loneliness), but it also removes the stigma some patients have reported feeling after being profiled and singled out for SDOH data collection.

Whether value-based care struggles or flourishes and becomes standard practice in the years ahead will depend on the degree to which it can deliver on its promise to improve lives and help restore trust in our health system. As we look at skyrocketing rates of diabetes, or the declining life expectancy of white men in some parts of the country due to opioid addiction, or so many other public health crises, we are confronted with a host of health issues that demand far more than status quo sick care. It’s time we take a different approach and  make the shift from managing sickness to doing whatever it takes to help people thrive and live their best health. 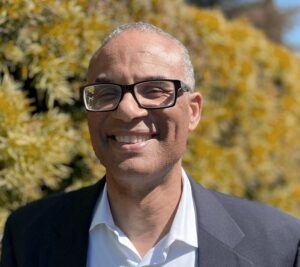 As Chief Medical Officer at Crossover Health, Dr. Ezeji-Okoye oversees the company’s national Medical Group, consisting of interdisciplinary care teams who deliver Crossover’s Advanced Primary Health model to members. He has a passion for population health and redesigning systems to drive improvements in quality and efficiency beyond medical intervention.